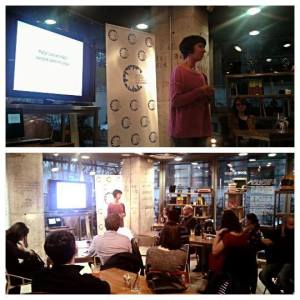 On February 15 we organized a debate within the Shaping Conversations series, focusing on Bucharest and the urban framework we call “home”, about the many characteristics that make our city eclectic and the way we can shape the future of the city.

From practical topics like who makes and decides on the plans for the future of Bucharest to nostalgia on how the city experience was in the early 90s and to philosophical questions like where/who draws the line between citizens’ needs and desires and urban/national needs, the debate laid the ground for future conversations. We now know, for example that University Square was at the beginning of twentieth century the Botanic Garden, that the University building was cut in half by bombardments and the remained space used as an interior garden, that there is a strategic concept for Bucharest 2035 or that more and more civic initiatives are becoming successful in impacting local urban policies.

Thank you for: visual harvesting Graphic Dealer and The Institute Cafe.